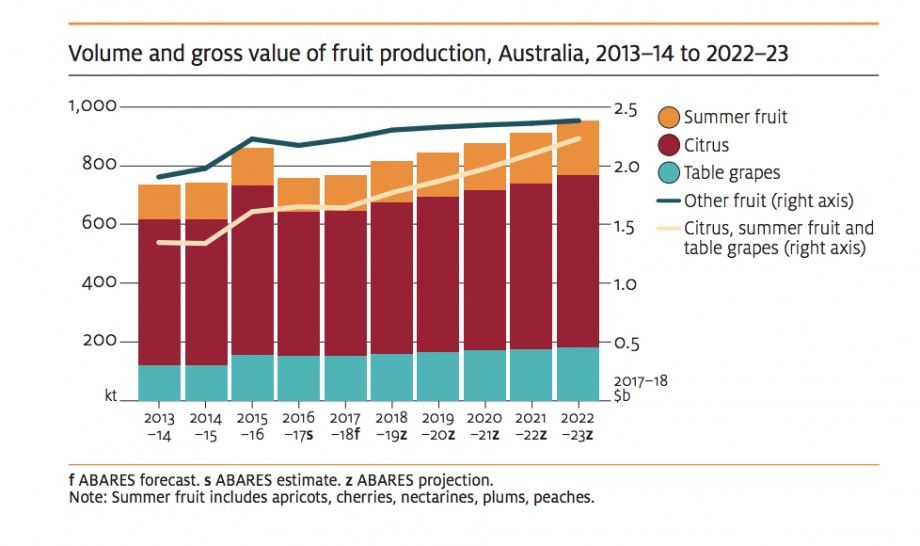 Australian produce may not be able to compete on price in overseas export markets, but it can compete on quality, reliability, and safety, according to ABARES’ senior economist Caroline Gunning-Trant.

“Exports of fresh horticultural produce were worth more than $2bn in 2016 to 17, with strong growth in fruit and nut exports over the past five years,” she said.

Meeting the expectations of consumers was a key takeaway point for delegates at the ABARES Outlook 2018 conference today in Canberra.

Over the six years to 2016-17, Australia’s fruit and nut exports to its top five destinations more than doubled, and the value of vegetable exports increased 50 per cent.

The ABARES Outlook 2018 Agricultural commodities report has forecast overall Australian agricultural exports to increase by A$3bn over the next five years, continuing the upward trend. However, due to record production in 2016-17, the gross value of overall farm production is forecast to decline in 2017-18 by five per cent.

In terms of competing with China’s own supply, the report also mentioned that the Chinese fruit industry is “not expected to produce sufficient quality fruit to displace imports from Australia over the medium term.”

Jones also stresses the importance of maintaining and improving market access protocols as critical to the industry’s success.

Domestically, the ABARES Outlook 2018 report also anticipates “moderate growth” for fruit, with Australian production and demand expected to increase, but per person fruit consumption to not growing significantly.

Throughout the next five years domestic fruit prices are expected to fall due to increased competition.

Growth in tree nut production has been significant, and is expected to correct itself as the continuously increasing global supply outpaces demand for growth.

High costs of irrigation for Australian growers is also expected to raise overall production costs meaning the industry will need to invest in supply-chain efficiencies and value-adding opportunities.